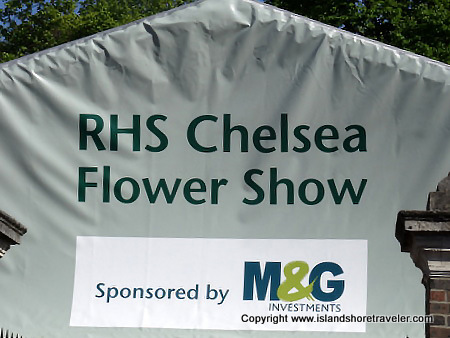 I was in London for a few days in May, enroute elsewhere in Europe, and some time after I booked my trip, I did some googling to see what events might be on in the city while I was there.  When I discovered that the world-famous Chelsea Flower Show was on, I was quite excited but figured that I would not likely be able to get tickets which, by that time, had been on sale for some period of time.  I couldn’t believe when I was able to successfully book tickets online for an early evening visit!

I have to say that nothing could have prepared me for the extravaganza that is the Royal Horticultural Society’s Chelsea Flower Show. Nothing. It is massive and boasts extravagant flower displays from around the world like the one pictured below from Thailand – thousands and thousands of flowers imported from Thailand especially for this show.

The annual 5-day garden show has been held on the grounds of the Royal Hospital in Chelsea, London, since 1913. While no longer the largest flower show in England (that title belongs to Hampton Court Palace) it is, however, considered the most prestigious and famous and is visited by members of the Royal Family.   Our tickets were valid for a three-hour visit and it was overwhelming to see the fabulous displays. We could easily have spent an entire day.

The creativity of the displays was a sight to see!

While there are a number of outside displays and a large number of stalls/booths selling anything and everything to do with gardening, the main focal point is the Garden Pavilion tent erected especially for the show. To give you a sense of the magnitude of this Pavilion, the RHS website states it covers 2.9 acres of land and has the capacity to hold 500 London buses! And, it was all filled with beautiful flowers and floral displays!

Many nations send representatives with floral displays to compete at the Chelsea Flower Show. For the sixth consecutive year, Thailand has won the gold medal at the show. In 2015, their Thai Buddhism design theme was “Thailand, Land of Buddhism” which featured tropical botanical gardens.

The show features horticultural displays, creative gardening ideas, and promotes rare floral varieties, new plant species, and future trends.  We knew there would be lots of flowers but we also found lots of ideas for outside living like this garden room.

The photo below shows the interior of one of the garden rooms on display – I’d have taken this one home if it would have fit in my luggage for transport back across the Atlantic Ocean! 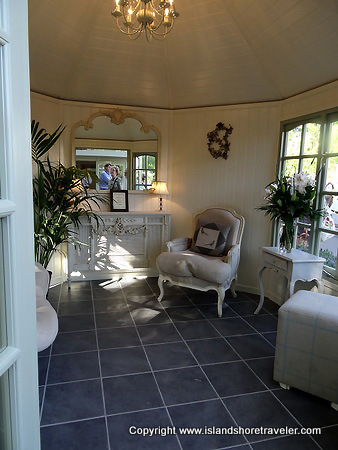 The one below with the big screen TV is not too shabby, either! 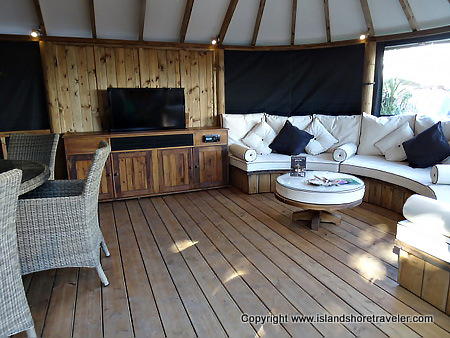 Who wouldn’t want a patio table with a built in barbeque! Perfect for outdoor entertaining. 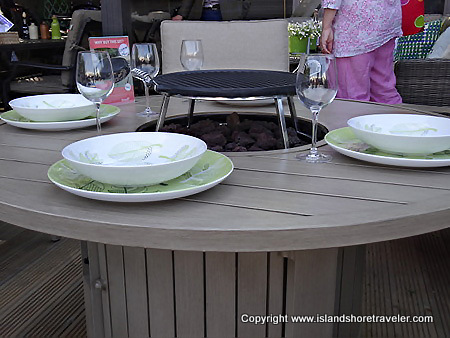 Floral displays were meticulous in every way and not a dead or wilted bloom could be seen. 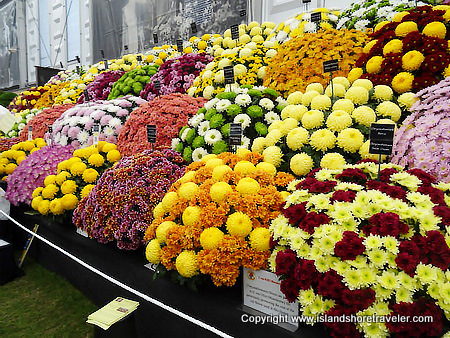 The different floral species and varieties were well marked.

The orange tulips below  almost look like a painting. 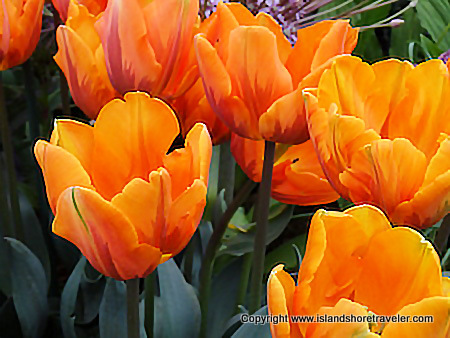 Spectacular color was everywhere at every turn! 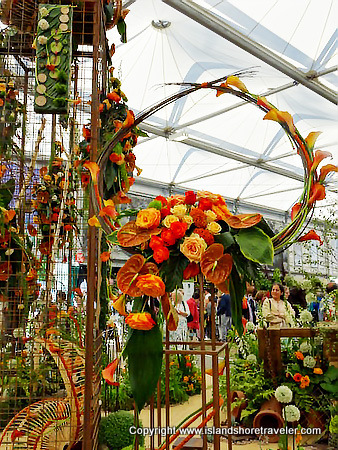 Beautiful begonias in every shade imaginable.

It was so hard not to take a thousand photographs! 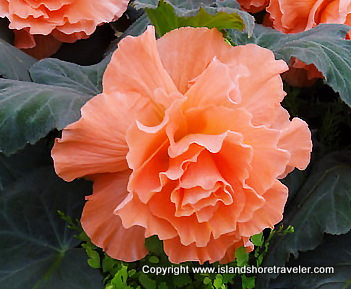 The displays below reminded me of decorated cupcakes! 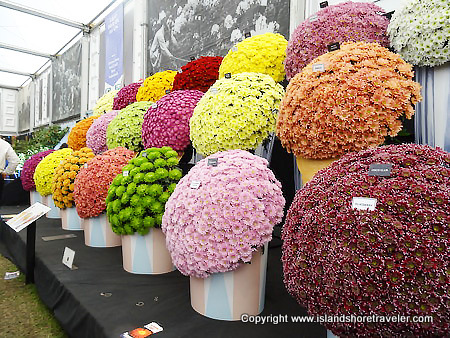 Loved this display of spuds at the show! 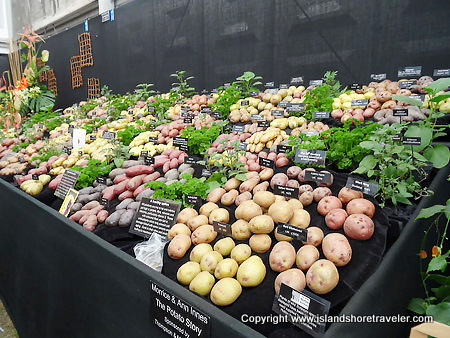 Flora in every shade and shape imaginable! 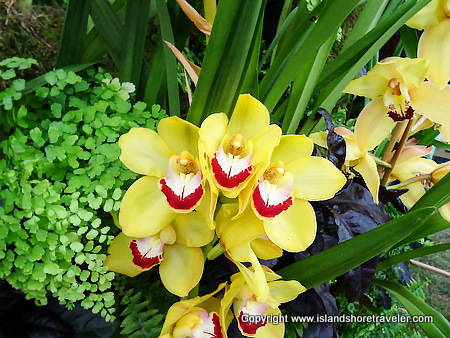 Look at the intricate detail of color in these blooms.

Hard to imagine what nature creates! 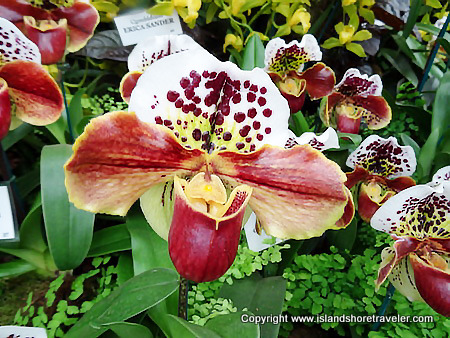 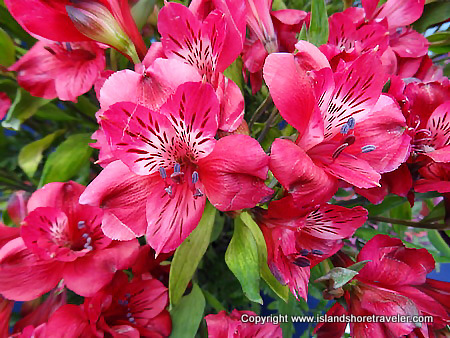 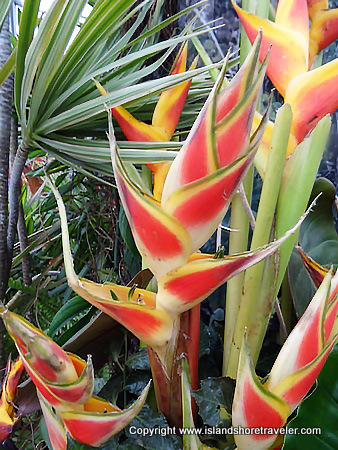 I loved the more whimsical displays like the teapot and cupcakes below. 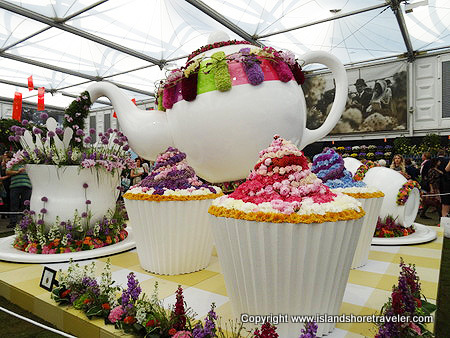 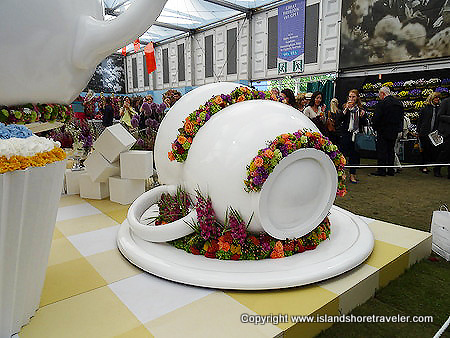 These displays were popular with photographers.  Some 157,000 visitors pass through the show in five days and I’d be willing to bet there were not too many of them who did not have a camera in hand! 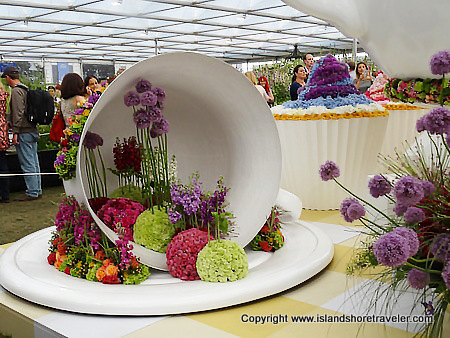 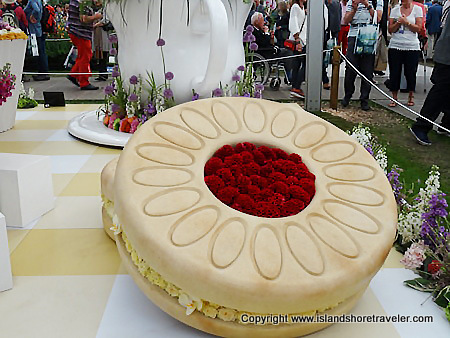 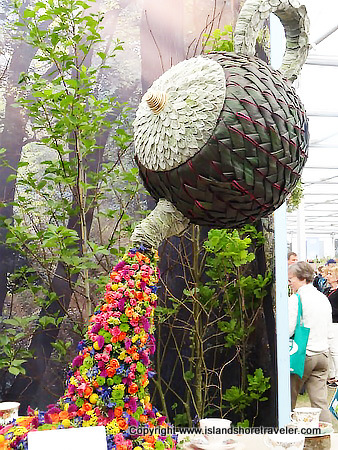 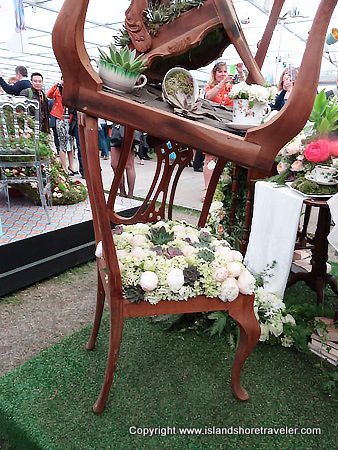 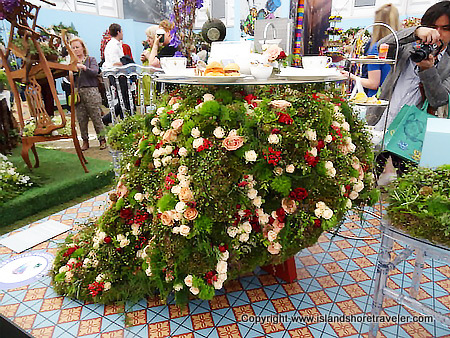 Atop the lovely tableskirt was a table set for afternoon tea.

A way to re-purpose old books, teapots, and teacups and saucers. 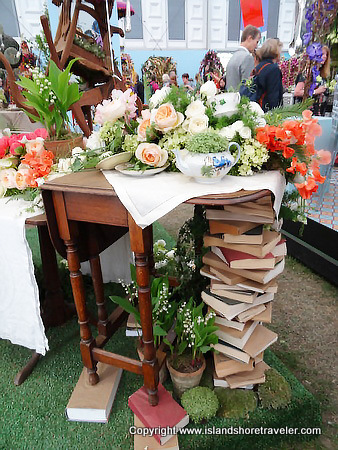 One of several floral arrangement submissions on exhibit from creative floral designers. 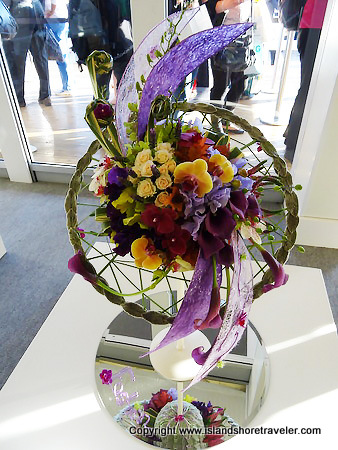 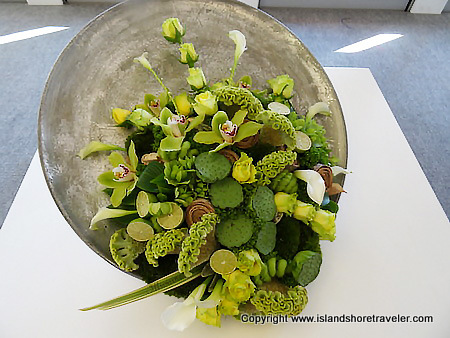 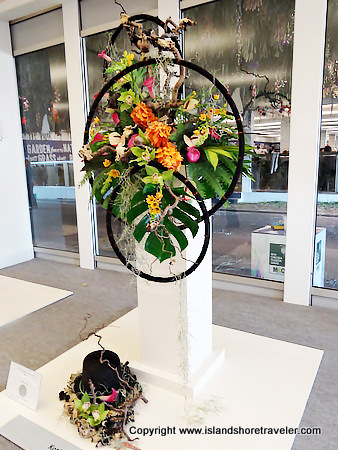 A beautiful autumn-themed display that incorporates many elements. 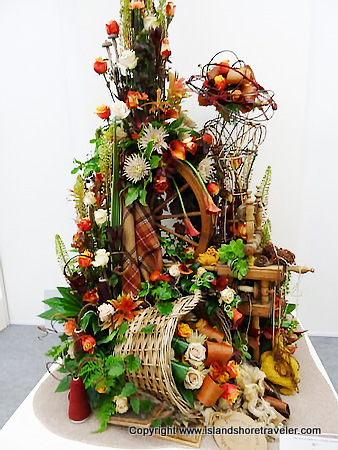 An old church window frame was the inspiration for this display.

We found the show very well organized and, of course, only permitting so many visitors on to the grounds at a time does control crowds.  We were staying in the Belgravia area of London this time so used the Tube (underground railway system) to and from the show.  There were a number of double decker buses leaving from nearby Victoria Station but traffic in London can be slow moving and it is very congested in the Chelsea area when the flower show is on so we felt the Tube would be the quickest way to get to Chelsea and back to our hotel. 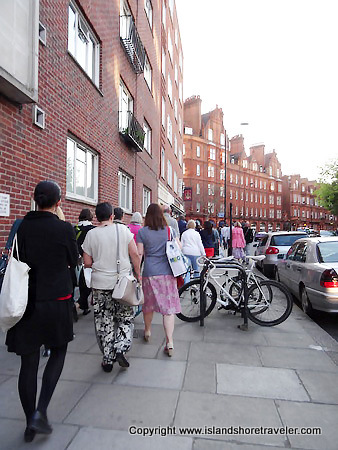 Thousands of people all moving at the same time means you need to have a good sense of direction and know where you are headed.  Some took advantage of the rickshaw service to get them from one point to another. 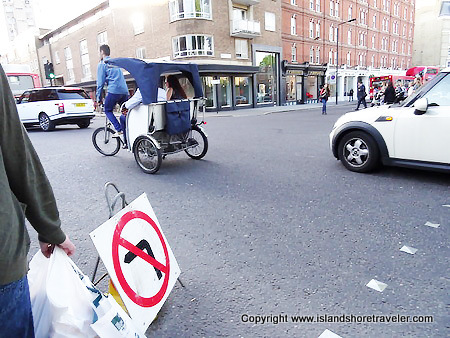 If you find yourself in London in May when the Chelsea Flower Show is on, I highly recommend a visit.  Just know, though, that tickets must be purchased in advance.  We bought ours online and picked them up at the ticket booth just inside the entrance gate to the show.

I hope you have enjoyed this brief glimpse into the Chelsea Flower Show as it was in 2015.

If you enjoyed this posting, please feel free to share it on your social media sites.

It’s easy to connect with the Island Shore Traveler through any of the following: