While each of the national parks in Prince Edward Island (PEI), my home province on the East Coast of Canada, is beautiful in its own way and you will find natural pink coastal sand dunes and soft sandy beaches in each, there is something extra special and breathtaking about Greenwich National Park. I often refer to it as the jewel in our crown of national parks. That’s why, when I am asked where is the one place I recommend visitors go on PEI, I inevitably say Greenwich.

Greenwich National Park is located near St. Peter’s Bay in the eastern end of the Island. This is less than one hour’s drive from the Province’s capital of Charlottetown. Greenwich is the newest of the Island’s national parks having just been established in 1998. The park is actually comprised of three main components: 1) The Interpretative Centre (where you can also buy your park pass); 2) the system of walking/hiking trails; and 3) the beach.

There are three trails in the Park and they range in length from 1.25km to 4.5km, return. My favorite is the one that has the floating boardwalk over shallow Bowley Pond which stretches alongside magnificent towering wind-sculpted pink sand dunes.

To reach this boardwalk, you will need to walk through a fairly level groomed trail that meanders through what was, at one time, an agricultural field and then a short jaunt through a wooded area. This will lead to the boardwalk with its spectacular vistas of the pink sand dunes contrasted against marine blue water from any angle. Be sure to bring your camera.

Through this wetland, look for a wide variety of bird species that call Greenwich home. What birds you will see will vary on any given day so it’s impossible to say which species you will see during a visit.

At the end of the boardwalk, a short climb up a set of sandy stairs will lead you to a perfect view of one of the nicest beaches you will find anywhere.

From the vantage point of the beach, and during fishing season, you can also watch the boats returning from the Gulf of St. Lawrence to a nearby harbour with their catch of the day.

If you don’t wish to do the hike through Greenwich trails and would sooner go directly to the beach, there is a separate entrance about 1 km down a clay road from the Interpretive Centre (note park fee applies to use this beach). There is a lengthy boardwalk from the parking lot to a section of Greenwich Beach. You will also find restrooms, outside showers, and changing facilities along with a kitchen/picnic shelter. 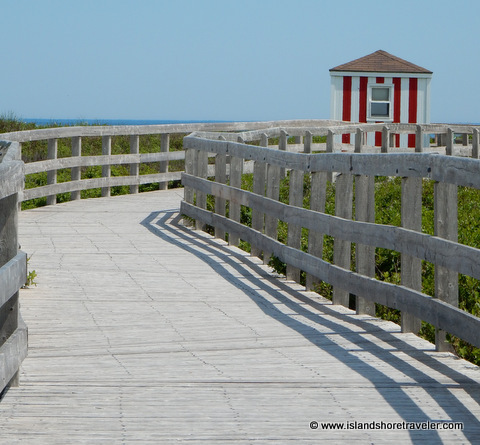 There is also a high set of spiral stairs leading to a lookout that will give you a spectacular 360⁰ view of Greenwich. During the main summer season, this beach also has a lifeguard on duty at prescribed hours throughout the day.

Special Note:
While the trails, for the most part, are on fairly flat terrain, there are some uneven, rough grounds (especially on the short trek through the wooded area and the climb up to the stairs down to the beach at the end of the floating boardwalk trail) so be sure to wear suitable hiking/walking footwear. As well, note that you will be sharing the beauty of Greenwich trails with the Park’s natural inhabitants so be sure to bring along some insect repellent. Also, it’s a good idea to bring sunscreen and water for the hike.
Season:
At time of writing, the trails are officially open from May 17th to September 30th.
Cost:
Parks Canada sets annual fees for its national park passes. Day and season passes can be purchased at the Greenwich National Park Interpretative Centre. Note that a season pass will also give you access to the other national parks on PEI. Visit the Parks Canada website for details.
How to Get There:
From Charlottetown, take Route 2 East and travel to the Village of St. Peter’s Bay. Take Route 16 North toward Cable Head and turn West onto Route 313 to Greenwich.

Thank you for visiting the Island Shore Traveler’s site. If you enjoyed this posting, please share it on your social media sites.